We are happy to announce a new version of the popular NewsML-G2 generator tool.

This version is easier to use, and shows how NewsML-G2 files can be created using either QCodes or URIs for controlled values. It also allows the user to select the body text format – either NITF (IPTC’s News Industry Text Format) or XHTML. Both formats are used by large news agencies to distribute news content, so using the selector can help you to see the difference between the two formats and perhaps help you to make a decision about which format to use.

The new version of the NewsML-G2 Generator can be accessed at the same URL as the older version: https://iptc.org/std/NewsML-G2/generator/.

To use the generator, simply start typing into the form on the left side of the screen. The grey box on the right hand side will immediately update with the relevant XML markup to represent your content in NewsML-G2 format.

The selectors above the output box on the right hand side allow you to change the output format:

Currently, the generator tool handles simple text news stories. Ideas for future enhancements are to include support for images, audio and video, packages of multiple news items possibly in multiple formats, the partMeta framework to include metadata about part of a news item, and more. Suggestions are always welcome – please contact us if you have any further ideas.

This week IPTC hosted its Spring Meeting. We’re getting used to the online format now and it worked very well once again! We had over 70 attendees this time, from IPTC member organisations and invited guests. 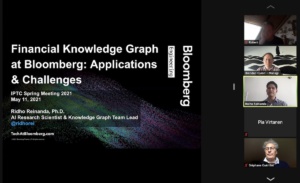 Day One included a focus on accessibility, with Jeanne Spellman of the W3C Silver Task Force giving a preview of the work towards the next version of WCAG, version 3. Jeanne described how the focus is shifting from “all or nothing” compliance to a graded score, with a fairer approach to multiple disabilities rather than the current focus on only a few conditions.

Monday also included a detailed session from Michael Steidl, now co-lead of the Photo Metadata Working Group along with David Riecks, who gave a detailed history lesson on metadata embedded in photos and the various ways that image metadata is used in different image formats. The knowledge came in handy on Wednesday when we looked at the detail of how trust metadata is embedded in images.

Day Two saw a focus on Knowledge Graphs and Semantic Technology, a growing topic of interest in newsrooms and media organisations around the world. We saw presentations on real-world implementations of knowledge graphs from Stuart Jennings of the BBC; Pia Virtanen of YLE, the Finnish national broadcaster; Ridho Reinanda of Bloomberg, and Manfred Mitterholzer of APA, the Austrian national news agency.

Silver Oliver of consultancy Data Language shared some lessons learned from working with linked data and semantic technologies for 10 years including his work on the BBC Sport Ontology. This led to an update from Paul Kelly on the progress of the IPTC Sports Content Working Group‘s ongoing work on making a semantic web version of our SportsML standard, with help from Silver and others.

Day Three started with updates from the News in JSON Working Group (from WG Lead, Johan Lindgren of TT) looking at work towards ninjs 2.0 including Protocol Buffers compatibility and some new fields for rights management. The NewsML-G2 and News Architecture Working Group update from WG Lead, Dave Compton of Refinitiv discussed some work on making NewsML-G2 easier to understand including a soon-to-be-revealed new version of the NewsML-G2 Generator tool.

After Linda Burman presented the recent work of the IPTC Public Relations Committee, we heard from three trust and credibility projects. WeVerify, presented by Denis Tayssou of AFP, is an EU project creating a toolkit for forensic analysis of website and images that can be used by fact checkers. WordProof, presented by its founder Sebastiaan van der Lans, is a blockchain-based verified time-stamping system that can be used to show when a piece of content was first created. Finally C2PA (the Coalition for Content Authenticity and Provenance) was presented by technical working group lead Leonard Rosenthal of Adobe. C2PA is working on the technical details underpinning the Content Authenticity Initiative, which we have heard about before, so it was great to learn more about the nuts and bolts of how it is planned to work.

Jennifer Parrucci of The New York Times, lead of the NewsCodes Working Group, presented the WG’s latest work, including last week’s update to NewsCodes including Media Topics, and looking into future work around supporting new languages, more integration with Wikidata, and explaining how users of Media Topics can extend the vocabulary to include their own terms. Then Kurt Mathiasen of TV2 Danmark discussed his organisation’s use IPTC Media Topics in their system workflows, and the challenges of their plans to use more industry standards such as IPTC’s News Architecture as a way to join up the metadata that is distributed between third-party systems and currently must be re-keyed or cut-and-pasted from one system to another.

The Spring Meeting ended with a surprise for Stéphane Guérillot, chair of the Standards Committee. He thought he was going to be chairing a meeting but instead we introduced many past IPTC member delegates as guest attendees, and presented a slideshow of some of his history over his amazing 40 year membership of IPTC! We all value and appreciate the work Stéphane has put in to IPTC over his tenure as working group lead, board member and Chair of the Board, Standards Committee Chair, and Treasurer. When Stéphane retires at the end of June, he will be sorely missed, although he is welcome to back any time, because as current Chair Robert Schmidt-Nia announced, the Board has agreed to make Stéphane an Honorary Member of IPTC. Congratulations, Stéphane!

We are pleased to announce the latest release of IPTC NewsCodes, including our main subject vocabulary for news content, IPTC MediaTopics.

The new terms were requested by MediaTopics users Ritzau in Denmark, NTB in Norway and AFP in France.

Please note that we only ever make changes to labels to make the meaning clearer, we never change the meaning of a term.

Changes to mappings from MediaTopics to other vocabularies

We had a major review of MediaTopic to Wikidata mappings, thanks to Lucy Butcher from Wirecutter (part of The New York Times, an IPTC member) for her contributions. Many terms have had their WIkidata mappings edited or added. In the near future, we are planning to add mappings from Wikidata back to NewsCodes.

Changes to other NewsCodes vocabularies

The Genre vocabulary had a major update, the second half of the review that was started in the February release.

As usual, all changes can be seen:

Please let us know if you spot any problems. If you are an IPTC member you can post issues, questions and suggestions to the NewsCodes Working Group list at iptc-newscodes-dev@groups.io.